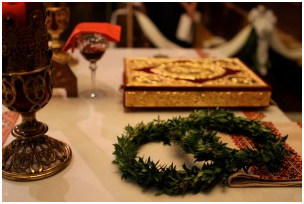 The four most important symbols of the wedding service on the tetropod: crowns, the gospel, the common cup, and the embroidered towel.

The wedding services in the Ukrainian Catholic Church are unique in many ways, but primarily in that they have remained almost entirely unchanged since their origination centuries ago. Comprised of two separate parts; The Betrothal and The Order of Crowing, each one taking place at separate times, it is the oldest institution created by God; “it is not good that man shall be alone”.

First, The Betrothal, which is what we refer to today as the engagement. It was the exchange of rings in church with a promise to wed. Later when ready, the young couple would ask both sets of parents for their blessing, and, upon receiving it, enter the church together to be crowned as husband and wife.

In witness of the community, the young couple processed from the home of the bride and entered the church. Upon doing so they reaffirmed that they had not promised themselves to anyone else and stated their wish and consent to be crowned as husband and wife. Over time, both parts were combined into one and are the way we witness the ceremony today.

The rings, circles with no beginning or end, are visible signs of the exclusive commitment, faith, and love for one another. The rings, of course, are the symbol of betrothal and their exchange signifies that in married life the weaknesses of the one partner will be compensated for by the strength of the other. By themselves, the newly-betrothed are incomplete: together they are made perfect. Thus the exchange of rings gives expression to the fact that the spouses in marriage will constantly complement each other. The essential meaning is beautifully brought out in the prayer in which the priest recites various examples from Sacred Scripture where rings are given. Before the exchange the Priest takes each ring separately and with it will make the sign of the Cross on the forehead of the young couple, signifying the equality of man and woman in the eyes of God

After the betrothal the clergy lead the couple into the church. Psalm 127(128) is sung – a psalm which recounts for us how God blesses those who revere Him. The entrance itself may symbolize for us the entrance of the marriage from the world into the Church, into the “world to come.”

Upon the tetropod are placed the Holy Gospel, a cup of wine, and the wedding wreaths. Two candles are lit as a reminder that Christ is “the Light of the world” Who offers Himself as illumination for the couple that they “will not walk in darkness but will have the Light of life”. The young couple will be given the candles to hold throughout the service.

The candles are like the lamps of the five wise maidens of the Bible, who, because they had enough oil in them, were able to receive the Bridegroom, Christ, when He came in the darkness of the night. The candles symbolize the spiritual willingness of the couple to receive Christ, Who will bless them through this Mystery.

The embroidery in the towels, interlaced with threads of various colors, represents all aspects of human life: family, love, tradition, hardship and faith in God. The one that they stand on indicates the new life they now begin. Before the couple begins their journey together, an embroidered towel is used to tie their hands together. This binding emphasizes their “oneness”, and the unity they now share in their common journey.

The Crowning is the most solemn moment and climax of the service. The most ancient Byzantine crowns, both religious and secular, were natural wreaths made from either olive branches or the stephanos plant (meaning ‘crown plant’ in Greek). When Christianity came to Ukraine, Myrtle was adopted as the plant of choice. These wreaths of myrtle are placed on the couple’s heads as signs of the glory and honor with which God crowns them during the Mystery. They are crowned as the king and queen of their own little kingdom, the home – domestic church, which they will rule with wisdom, justice, integrity, love, peace and harmony. To stress the equality of the partnership and unity, the wreaths are exchanged three times over the heads of the young couple

The sharing of a common cup of wine, the “common cup of life”, signifies that in marriage all things are shared equally. This cup of wine reminds us of the miracle at Cana. That Jesus chose a wedding to enact his first miracle is the most profound indication of the dignity attributed to the union of man and woman by God. Since the changing of water into wine at Cana, Jesus continues to change the ‘water’ of ordinary relationships into the ‘wine’ of Sacramental marriage.  In remembrance of Christ’s first miracle, therefore, a cup of wine is shared by the Bride and Groom as a sign of unity with each other and with Christ.

The ceremonial walk reminds us to center our lives upon Christ who is present in the Holy Gospel on the tetropod. A symbolic dance for the joy of God’s presence, it is conducted in a circular fashion lead by the priest who holds their united hands. This highlights the Church’s prayerful desire that the couple will walk through life led by the infallible and secure Word of God.

Circling three times is affirmation in their belief of the Holy Trinity, and God’s presence in their lives in divine, human and spiritual form. While circling, the couple kiss the wedding icons of Christ and the Mother of God which are held by the Starosty/Elders. 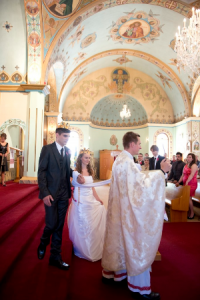 During this ceremonial walk, husband and wife take their first steps as a married couple and follow the priest who leads them in the way they should walk.  As they walk, a hymn to the Mother of God is sung as well as the troparias to the Holy Martyrs.  This serves to remind the couple of the sacrificial love they are to have for each other in marriage.

As the wreaths are removed, the priest blesses the couple.  “God…bless their comings and goings.  Give their life a great store of good things and receive their crowns in your kingdom, keeping them without spot or stain or reproach for now, always and forever, and ever. Amen.”

A blessing of the bride follows, after which is the signing of the register.

The liturgy of crowning concludes with the singing of “Mnohaya Lita” (God grant them many years and blessings of health and salvation).  With these wishes and blessings the couple makes their way out of the church and into their new life renewed in Christ!

For the love of mankind, God sent His Son not to condemn the world, but to save it.  Christ calls Himself the Good Shepherd and promises to lay down His life for the sheep.  Christ passes on His pastorship to His chosen apostles and their successors.  He does this that through them He would continue to remain in the Church and lead it.

Holy Orders is the mystery through which the mission entrusted by Christ to his apostles continues to be exercised in the Church until the end of time: thus it is the sacrament of apostolic ministry. It includes three degrees: episcopate, presbyterate, and diaconate (bishops, priests and deacons).CCC #1536

By receiving the sacrament of Holy Orders, the priest gives himself entirely to God and is entrusted with a sacred power for the service of the faithful. This service is exercised through teaching, divine worship and pastoral governance.  Like the Good Shepherd, he is sent to guide the people of God and to build up unity.  The Holy Spirit makes him another Christ that will bring God to the world through his fidelity to the Gospel and his pastoral charity.

The priest is not asked to be an expert in economics, construction or politics. He is expected to be an expert in the spiritual life, to teach silence to the laity so that they may hear within themselves the voice of God; and to give them training they need to transform the professional, social, economic, cultural and political concerns from the inside through their daily work, bringing it to Christ and His way of life.

In the Roman Catholic Church, usually only men who have first committed themselves to the celibate life can be admitted to the priesthood.  In the Eastern churches, such as ours, married men may be ordained.

For more comprehensive explanations see:  The Catechism of the Ukrainian Catholic Church: Christ Our Pascha pages 164-169 at  http://catechism.royaldoors.net/catechism/