The Divine Liturgy is a Eucharistic service and is the primary worship service of the  Church. We come to the Liturgy to give glory to God. To give God glory we come as we are.  We bring ourselves symbolically—we are the gift that we bring to God during the Liturgy.  This means that we trust God with the things that are beyond our control, whatever challenges, problems, hardships, and so we invite Him into all the various dimensions of our life. This means that we surrender our struggle to control everything and say: “God, you may see things differently. I open my heart to you”.   We open ourselves to His touch, His healing, and His power, that we may be transformed into our truer selves, so that we can grow into our potential. We are called to grow in the likeness of God – to put on Christ so that it is no longer we who live, but Christ who lives in us.

Three forms of the Divine Liturgy are used, of which the most common is that of St. John Chrysostom.  The Divine Liturgy of St. Basil the Great has the same structure as that of St. John Chrysostom, but differs in certain of its prayers.  It is celebrated on the five Sundays of Great Lent, on the vigils of Easter, Christmas and Epiphany (Theophany), on Holy Thursday and on the Feast of St. Basil.  The Liturgy of the Pre-sanctified Gifts, in which Holy Gifts that have previously been consecrated are used for Holy Communion is used on certain days during Lent.

Before the Divine Liturgy proper begins, behind the iconostasis, at the table of preparation, the priest and a deacon, if one is serving, begin by preparing the gifts of bread and wine for use in the service.  This service is more than simply setting aside the bread and wine; a ritual has developed with elaborate symbolism.

Five loaves of bread are used, reminiscent of the five loaves in the wilderness, from which the masses were fed. During the Proskomedia, the priest cuts out a square called the Lamb from the main loaf of bread (prosphora). This will be consecrated during the Liturgy of the Faithful to become the holy body of Christ. He also removes small particles and places them on the diskos   (or paten) in commemoration of the Th 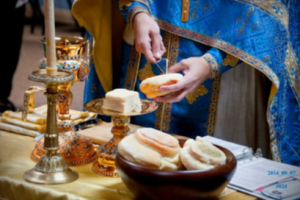 eotokos, various saints, and the living and departed faithful.

During the preparation, the priest also blesses wine and water, which are poured into the chalice. The gifts are incensed several times during the Proskomedia. The conclusion of the preparation leads directly into the beginning of the Divine Liturgy.

Liturgy of the Catechumens

The royal doors are opened and the Divine Liturgy begins with the memorable exclamation from the priest, “Blessed is the kingdom of the Father and of the Son and of the Holy Spirit, now and ever and ever.” The assembled faithful respond, “Amen.”

This opening reminds us that the Kingdom of God is in our midst, but not yet in its fullness.  We are pilgrims on a journey to the fullness of the Kingdom.  The priest as our leader (shepherd) in that journey stands before us and faces the altar.  That is, the priest faces East, whence the sun rises daily to shed light upon the earth and is symbolic of the comings of Christ.  The East is symbolic of life, creation and newness to which we are always called.

The Great Litany follows, so called because it is longer than most litanies and its petitions touch on the needs of the world: peace and salvation, the Church, her bishops, her faithful, captives and their health and salvation, deliverance from anger and need.  The presence of the litany here reminds us that this journey is easier if one carries less baggage with oneself.  Our first act is to show our complete trust in God.  We give Him our concerns, our hopes, our fears and our petitions as we pray for the world. It is concluded, as with most litanies, by calling to the remembrance of the faithful the witness of the Theotokos and the saints. In light of that powerful witness, the faithful are charged to commend their lives to Our Lord Jesus Christ. A closing prayer is exclaimed by the priest.

There follow two antiphons which vary by day and jurisdiction. The first antiphon is followed by a shorter litany and a prayer. The third is followed by the Little Entrance, at which is sung, “O Come, let us worship and fall down before Christ. O Son of God… save us who sing to You: Alleluia!” “Son of God” is normally followed by an insertion, such as “risen from the dead,” “wondrous in thy saints,” or “through the prayers of the Theotokos,” depending on the day.

The Troparia and kontakia (the poetic hymns) prescribed for the day and season follow next.

Having fully entered the church liturgically and gathered together around the Word, the gathered body chants the Trisagion (Holy God).

The word of God is proclaimed to the faithful in the Epistle and Gospel readings and in the homily.   This is to prepare the Body of Christ to unite intimately with Christ in His offering to our Father in the Anaphora, the heart of the Liturgy which will soon follow.

The service continues with the Litany of Fervent Supplication, which is marked by an insistent triple repetition of “Lord, have mercy.”

The Liturgy of the Catechumens is concluded by a litany praying for the continued growth of the catechumens in faith, leading up to the day of their baptism. Though many churches do not have catechumens in attendance, this litany remains in the liturgy and serves as a constant reminder of the Great Commission, the foundation of the Church as mission to the world.

Liturgy of the Faithful

As the assembly begins chanting the Cherubic Hymn, the celebrants go to the table of preparation. The priest presents the diskos to the deacon and takes the chalice himself. The deacon leads the priest through the north door of the icon screen. The clergy bring the gifts in procession to the holy doors, the central doors of the icon screen, while the deacon calls the faithful to attention, asking that the Lord will remember all people in his kingdom. As the holy gifts are carried solemnly through the holy doors, the assembled faithful conclude the Cherubic Hymn. (Note: if a deacon is not present, the priest makes this entrance with the diskos and chalice alone.)

In this procession we are again reminded to be unconcerned by our worldly cares because we have placed them in God’s hands.  We are united with the choirs of angels to welcome the Lord, soon to be present amongst us in the Eucharist.

After the priest blesses the faithful, the deacon exclaims, “The doors! The doors!” This famous exclamation once marked the point in the service at which the doors to the temple were locked, with only faithful Christians remaining. Over the centuries, visitors have been allowed to stay, though the solemnity of what follows is still recalled with this phrase.

Then, the Church recites the ancient Nicene Creed.   The Creed was written at the first two Ecumenical Councils in Nicea (325) and Constantinople (381). This document contains the fundamental beliefs of the Church. The liturgical name for this creed is the Symbol of Faith: There is One God who created us out of love, has not stopped doing everything for us, and who leads us to share in the eternal love relationship of the Holy Trinity.

Following the Creed, the priest begins the anaphora, the great Eucharistic prayer over the gifts, so called because of the initial phrase: “Let us lift up our hearts.” The two principal anaphoras in use in the Church are those of St. John Chrysostom and St. Basil the Great.

After remembering the history of our fall and redemption and the institution of the Eucharistic meal, the priest invokes the Holy Spirit, asking that he be sent down on the gifts. It is sometimes noted that this invocation, the epiclesis, is the climax of the change of the gifts of bread and wine into the body and blood of Christ, but there is not total

agreement among scholars whether the change can actually be pinpointed to a single moment in the service. It is certainly true that the prayers of the service treat the gifts as consecrated and changed after this point.

Having invoked the Holy Spirit and consecrated the gifts, the priest commemorates the saints, beginning with the Theotokos. At this point, the assembled faithful chant the ancient hymn in honour of the Virgin, “It is truly right to bless you, O Theotokos, ever-blessed and most pure, and the Mother of our God. More honorable than the cherubim, beyond compare more glorious than the seraphim, without corruption you gave birth to God, the Word. True Theotokos, we magnify you.”

In response to a request to teach them to pray, the Lord gives His disciples this prayer. Throughout the service, we have called upon God with many names (“Lord”, “Master”, “Holy Mighty and Immortal One”). Now, though, for the first time, we call upon God as our Father. This shows that, as we draw closer to God in the Liturgy, we also enter into an ever-deepening intimacy with Him. This intimacy will be consummated in our reception of Christ into our lives through receiving His Body and Blood in Holy Communion.

The Communion and Dismissal

After consecrating the gifts, commemorating the saints, and praying for the local bishop, the priest lifts up the consecrated gifts, exclaiming, “The holy things are for the holy!” To which the faithful respond, “One is holy, one is Lord, Jesus Christ, to the glory of God the Father, amen.” This phrase unfortunately loses something in English, since we have two words for holy and saint. In most other languages, this dialogue has a connotation of, “The holy things are for the saints! / Only one is a saint! Only one is Lord: Jesus Christ….” This is a rather prominent reminder that our holiness finds its source in God alone, and particularly in our participation in this communion. 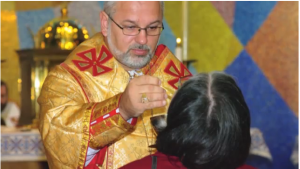 The faithful communicate in Byzantine tradition by receiving in both kinds (bread intincted in the wine) from a spoon, a tradition which dates to the fourth century.

Renewed by the Eucharistic meal, the faithful are sent forth as witnesses.

During the Divine Liturgy we offer our lives to God.  We ask that we become a beautiful gift to be given to the world.  We come to celebrate the gift that we are – a gift to be given away, given for others.  We are called to be to be healers, builders, unifiers – to give life to the world.  “We who have been baptized into Christ have put on Christ!”   We are called to be Christ to one another!

The actions of the liturgy

The words of the liturgy are accompanied by actions, which allow the whole person to participate in Divine worship:

Roles in the liturgy

No Christian, by virtue of an office or liturgical role, has any claim to greatness before God; all that we do in the liturgy is delegated by our Mother the Church.  But by the same token, not all who take part in the liturgy do so in the same way.

For a comprehensive explanation of the Divine Liturgy see Catechism of the Ukrainian Catholic Church: Christ Our Pascha pages 121-137 at http://catechism.royaldoors.net/catechism/