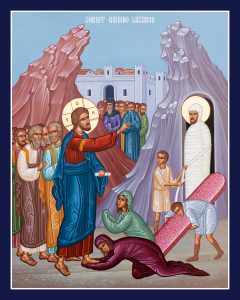 On Friday evening, the eve of the celebration of the Resurrection of Lazarus, the “great and saving forty days” of Great Lent are formally brought to an end:  Having accomplished the forty days for the benefit of our souls, we pray to Thee, O Lover of Man, that we may see the holy week of Thy passion, that in it we may glorify Thy greatness and Thine unspeakable plan of salvation for our sake . . .(Vespers Hymn).

On the Saturday before Holy Week, the Church commemorates a major feast of the year, the miracle of our Lord when he raised Lazarus from the dead after he had lain in the grave four days. Here, at the end of Great Lent and the forty days of fasting and penitence, the Church combines this celebration with that of Palm Sunday. In triumph and joy the Church bears witness to the power of Christ over death and exalts Him as King before entering the most solemn week of the year, one that leads the faithful in remembrance of His suffering and death and concludes with the great and glorious Feast of Pascha.

As a result of this miracle, many of the Jews that were present believed in Jesus. Others went and told the Pharisees what Jesus had done. In response the Pharisees and chief priests met and considered how they might arrest Him and put Him to death.

This miracle is performed by Christ as a reassurance to His disciples before the coming Passion: they are to understand that, though He suffers and dies, yet He is Lord and Victor over death. The resurrection of Lazarus is a prophecy in the form of an action. It foreshadows Christ’s own Resurrection eight days later, and at the same time it anticipates the resurrection of all the righteous on the Last Day: Lazarus is “the saving first-fruits of the regeneration of the world.”

The miracle at Bethany reveals the two natures of Christ the God-man. Christ asks where Lazarus is laid and weeps for him, and so He shows the fullness of His manhood, involving as it does human ignorance and genuine grief for a beloved friend. Then, disclosing the fullness of His divine power, Christ raises Lazarus from the dead, even though his corpse has already begun to decompose and stink. This double fullness of the Lord’s divinity and His humanity is to be kept in view throughout Holy Week, and above all on Good Friday. On the Cross we see a genuine human agony, both physical and mental, but we see more than this: we see not only suffering man but suffering God.

By raising Lazarus from the dead before Thy passion, Thou didst confirm the universal resurrection, O Christ God! Like the children with the branches of victory, we cry out to Thee, O Vanquisher of Death: Hosanna in the highest! Blessed is he that comes in the name of the Lord! (Troparion).

Christ —the Joy, the Truth and the Light of All, the Life of the world and its Resurrection—has appeared in his goodness to those on earth. He has become the Image of our Resurrection, granting divine forgiveness to all (Kontakion)

Adapted with appreciation from:
Orthodox Church in America at https://oca.org/orthodoxy/the-orthodox-faith/worship/the-church-year/lazarus-saturday-and-palm-sunday
http://www.goarch.org/lazarus

On the Sunday before the Feast of Great and Holy Pascha, the Church celebrates one of its most joyous feasts of the year. Palm Sunday is the commemoration of the Entrance of our Lord into Jerusalem. Having anticipated His arrival and having heard of the miracle of Lazarus’ raising, the people when out to meet the Lord and welcomed Him with displays of honor and shouts of praise.

At the outset of His public ministry Jesus proclaimed the kingdom of God and announced that the powers of the age to come were already active in the present age (Luke 7:18-22). His words and mighty works were performed “to produce repentance as the response to His call, a call to an inward change of mind and heart which would result in concrete changes in one’s life, a call to follow Him and accept His messianic destiny. The triumphant entry of Jesus into Jerusalem is a messianic event, through which His divine authority was declared.

Palm Sunday summons us to behold our King: the Word of God made flesh. We are called to behold Him not simply as the One who came to us once riding on a colt, but as the One who is always present in His Church, coming ceaselessly to us in power and glory at every Eucharist, in every prayer and sacrament, and in every act of love, kindness and mercy. He comes to free us from all our fears and insecurities, “to take solemn possession of our soul, and to be enthroned in our heart,” as someone has said. He comes not only to deliver us from our deaths by His death and Resurrection, but also to make us capable of attaining the most perfect fellowship or union with Him. He is the King, who liberates us from the darkness of sin and the bondage of death. Palm Sunday summons us to behold our King: the vanquisher of death and the giver of life.

Palm Sunday summons us to accept both the rule and the kingdom of God as the goal and content of our Christian life. We draw our identity from Christ and His kingdom. The kingdom is Christ – His indescribable power, boundless mercy and incomprehensible abundance given freely to man. The kingdom does not lie at some point or place in the distant future. In the words of the Scripture, the kingdom of God is not only at hand (Matthew 3:2; 4:17), it is within us (Luke 17:21). The kingdom is a present reality as well as a future realization (Matthew 6:10). Theophan the Recluse wrote the following words about the inward rule of Christ the King:

“The Kingdom of God is within us when God reigns in us, when the soul in its depths confesses God as its Master, and is obedient to Him in all its powers. Then God acts within it as master ‘both to will and to do of his good pleasure’ (Philippians 2:13). This reign begins as soon as we resolve to serve God in our Lord Jesus Christ, by the grace of the Holy Spirit. Then the Christian hands over to God his consciousness and freedom, which comprises the essential substance of our human life, and God accepts the sacrifice; and in this way the alliance of man with God and God with man is achieved, and the covenant with God, which was severed by the Fall and continues to be severed by our willful sins, is re-established.”

The kingdom of God is the life of the Holy Trinity in the world. It is the kingdom of holiness, goodness, truth, beauty, love, peace and joy. These qualities are not works of the human spirit. They proceed from the life of God and reveal God. Christ Himself is the kingdom. He is the God-Man, Who brought God down to earth (John 1:1,14). “He was in the world, and the world was made through Him, yet the world knew Him not. He came to His own home, and His own people received Him not” (John 1:10-11). He was reviled and hated.

Palm Sunday summons us to behold our King – the Suffering Servant. We cannot understand Jesus’ kingship apart from the Passion. Filled with infinite love for the Father and the Holy Spirit, and for creation, in His inexpressible humility Jesus accepted the infinite abasement of the Cross. He bore our griefs and carried our sorrows; He was wounded for our transgressions and made Himself an offering for sin (Isaiah 53). His glorification, which was accomplished by the resurrection and the ascension, was achieved through the Cross.

In the fleeting moments of exuberance that marked Jesus’ triumphal entry into Jerusalem, the world received its King, the King who was on His way to death. His Passion, however, was no morbid desire for martyrdom. Jesus’ purpose was to accomplish the mission for which the Father sent Him.

“The Son and Word of the Father, like Him without beginning and eternal, has come today to the city of Jerusalem, seated on a dumb beast, on a foal. From fear the cherubim dare not gaze upon Him; yet the children honor Him with palms and branches, and mystically they sing a hymn of praise: ‘Hosanna in the highest, Hosanna to the Son of David, who has come to save from error all mankind.’” 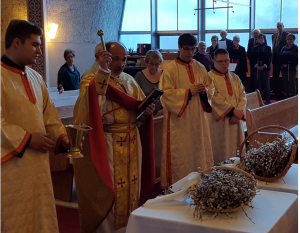 On Willow or Palm Sunday we recall the triumphant entry of Jesus into Jerusalem before His passion.  This day is considered one of the twelve Major Feasts of the liturgical year in the Byzantine Rite.  It is always celebrated on the Sunday before Easter and includes the blessing of willow branches.

Pussy willows express well the liturgical symbolism of Palm Sunday.  During the winter the willow tree seems to be dead.  Yet, with the coming of spring, it sprouts and gives a sign of life.  The willow branches bring to mind the wood of the Tree of the Cross, while the buds, a sign of new life, remind us of our own glorious resurrection.

The blessed branches are carried home as a sacramental, as a visible symbol of Christ’s presence.  They may  be entwined on a crucifix or used to decorate as icon.  They serve as a “sign of salvation” and a “pledge of protection and blessing” during the coming year.