Sunday of the Prodigal Son 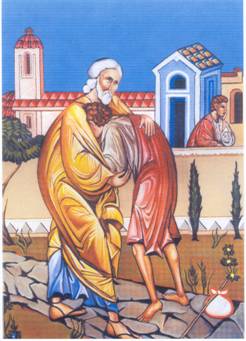 We all know the parable of the father and his two sons, the younger receiving his share of the money and going off to a far away land and squandering it all on loose living. After a whirlwind of parties, he found that all that the world had to offer him now was poverty, hunger, sickness, and degradation.  Yes, degradation:  he was so desperate for food that he took a job from a local farmer feeding his pigs.  For a Jew, there was not much further down to go.

Then he had his moment:  here he was, working himself to death and still starving, while his father’s servants were not working as hard and eating quite well.  That was when he decided he would swallow what was left of his pride, go and humble himself before his father, and ask for a job. Upon his return, His Father embraces him and holds a feast in his honor.

The older brother, a son who always followed his father’s wishes, never left his father’s side, becomes angry and jealous, refusing to partake in the joy of his brother’s return. He complains to his father saying: ” Lo, these many years I have been serving you; I never transgressed your commandment at any time; and yet you never gave me a young goat, that I might make merry with my friends. But as soon as this son of yours came, who has devoured your livelihood with harlots, you killed the fatted calf for him.”

In this parable we are told and in our minds we think of the younger as being the Prodigal. But which one of these two brothers is truly the Prodigal Son? Is it the younger who leaves and comes back in repentance, or the older brother who refuses to welcome him back? I tell you it is both brothers. For if we examine the parable from a different view we will see that even though the older brother always obeyed his father, he too is constantly squandering his father’s riches.

How is he doing this? The Father has given all of us gifts, gifts that could be used for His glory, or squandered for our own purposes. The older son only obeys the father for he expects something in return! He has gone by the book all his life, for all the wrong reasons. He has not learned love, the perfect love that the father possesses! By not striving to be as perfect as his father is, he does things for the opposite reason, to what the father does.

He too lives in a strange land, for his actions are strange to his father, this is not the way that the Father created us to be, to live in self-centeredness, and even worse not to realize the sin of selfishness, and therefore not to feel the need to repent. His brother was lost but now is found, he was dead and now is alive again, all because of his remorse for his way of living, and his repentance in returning to the love of the even as a servant. His brother though is too blind to understand this, for he has done everything in his life by his father’s law, but all has been done in vain, for he is lost in himself, and cannot be found, he is dead in his sin, and cannot arise for he is too blind to see.

How many Christians live by the book? Go to Church every service, out of duty, pray to God, but with empty words, help the Church financially, but for the wrong reasons, doing all this but never realizing the intentions of God and how we should truly live as Christians. They go home and gossip about each other, slander their neighbors’ name, and do not possess even the love to forgive their transgressors! Yet they expect to be saved for their empty works.

We are entering Great Lent soon, and Christ asks us today, which of these brothers are you identified with? What will we answer? Do we truly see our sin, or just our brother’s and sister’s? Do we indulge in cursing, gossiping, and slandering our follow Christian brother’s or sister’s name? or do we come to ourselves and strive to be better every day in repentance? Do we truly treat each other with Christian love or are we holding any grudges against anyone, or does it matter, for we live by the book and feel that we will be saved anyway?

We are all prodigals in our own way, but let us be like the younger prodigal son, let us realize that we live in a strange land full of sin, and we need to return and live in our Father’s kingdom where love and peace rule.   The repentance of the younger prodigal son reveals the true nature of repentance.  Repentance is not simply “feeling bad” over having broken God’s rules; it is a return to yourself and a return to your home.  It is a return to yourself and to sanity because sin is essentially stupid.  God offers us life and joy, a continuous stream of the divine Presence flowing into our lives if only we will constantly lift up our hearts to Him and seek His face, a flow which not even death can stop.  Sin bids us to choose something else instead—devotion to lust, or ambition, or the thousand other alternatives to God we can manage to find—and we choose that, even though whatever fleeting pleasure we can take from it will cease with our death, if not long before we die.  How dumb is that?  Repentance means coming to our senses.

We’ve all had moments like that—the moment when you wake up and realize you’ve been a complete moron.  The Prodigal Son had one such moment when he realized he was being idiotic and stupid, (or in the more elegant language of the parable, “when he came to himself”).  Repentance is a return to our true home in our Father’s house.  We were created to be His children, with all the privileges that this implies—being free from fear, free from death, free to walk through life trusting in Him to provide what we need and to lead us where we should go.  Why wander far from home when the wide world cannot offer us anything comparable?  Repentance means we return to the embrace of the Father, and to His humbling love, and to a house of feasting and music and joy.

Returning to sanity, and to the Father’s embrace—sounds like a plan.  Great Lent is coming, and it tells us we have been feeding the pigs long enough.  Let’s all go home. 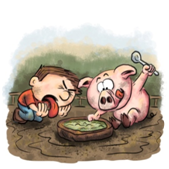 Adapted with appreciation from:
Orthodox Church in America at https://oca.org/reflections/fr.-lawrence-farley/the-repentance-of-the-prodigal
https://www.goarch.org/-/the-prodigal-son