The Sunday of Zacchaeus: This is the first “signal” that the season of Great Lent is approaching.  This is unfailingly certain each year. There thus exists a pre-Lenten preparation in the Church. Why is this so?

Father Alexander Schmemann provides the following insight:  “Because of the deep psychological insight by the Church into human nature.  Knowing our lack of concentration and the frightening ‘worldliness’ of our life, the Church knows our inability to change rapidly, to go abruptly from one spiritual or mental state into another.  Thus, long before the actual effort of Lent is to begin, the Church calls our attention to its seriousness and invites us to meditate on its significance.  Before we can practice Lent we are given its meaning.  This preparation includes five consecutive Sundays preceding Lent.”

If one is to find meaning in this period of pre-lent, one must be pro-lent!  We need to look forward to Great Lent, not as a burden to be endured; but as a season of renewal to be embraced – eagerly and decisively.    Zacchaeus, the “vertically-challenged” tax-collector becomes, for us, representative of our better impulses in his desire to “see Jesus.”  In emulating Zacchaeus ourselves, we will be able to overcome our own “smallness of stature” and act decisively – “climb a sycamore tree” – and encounter Christ in a meaningful way. 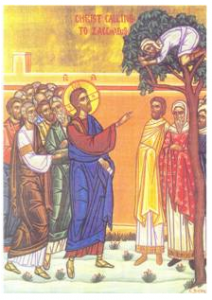 Real men do not climb trees.  At least they didn’t in the Middle East in the time of Jesus.  Neither did they run.  Running was for children, professional messengers, and soldiers.  Adults who were neither professional runners nor soldiers did not run.  They strolled at a leisurely pace, as befit men of importance and great dignity.

It is important to keep these bits of Middle Eastern culture in mind when we read the story of Zacchaeus in Saint Luke’s Gospel.  He badly wanted to see Jesus when he heard at the last minute that He was passing through his town of Jericho.  There was a great crowd surrounding Him, and Zacchaeus, being a short little man, could not see past the crowd.

Normally Middle Eastern crowds would make way for rich important people, but Zacchaeus knew there was little chance of that.  He was a chief tax-collector, someone who had fattened himself and feathered his nest through ripping off others at every opportunity, and he was well and thoroughly hated for it as a result.  No one in the anonymous crowd was going to make way for him, and wading into the crowd was too dangerous.  Like all people who were hated, Zacchaeus avoided wading into crowds; his back would be too exposed to anyone carrying a knife.

But so great was his desire to see Jesus that he did something no important adult with the least bit of concern for his dignity would do: “He ran on ahead and climbed up into a sycamore tree to see Him” (Luke 19:4).  Note: He both ran and climbed into a tree.  By doing so, he exposed himself to ridicule and this in a culture where public honour meant everything.  Perhaps he felt he was so hated already that he had nothing to lose, but I think it still cost him something to run and to climb.  When he ascended the sycamore, he left the last tattered shreds of his pride at the base of the tree.

Then it happened—the unthinkable.  Zacchaeus not only saw Christ, but the Lord stopped under the tree and looked up at him.  I imagine that for a moment Zacchaeus’ heart was in his mouth, as he waited the long moment before Jesus began to speak.  What would He say?  Jesus was known to be on the side of the poor—the very poor that Zacchaeus had been cheating and oppressing for years.  “Blessed are you poor, for yours is the Kingdom of God!  Woe to you that are rich, for you have received your consolation in full!  Woe to you that are full now, for you shall hunger!  Woe to you that laugh now, for you shall mourn and weep!” (Luke 6:20, 24-25)  What would He say to him?  His guilty conscience prepared itself for a terrible tongue-lashing.  But the justified tongue-lashing never came.  Instead, Jesus said something even more shocking:  “Zacchaeus, hurry and come down, for today I must stay at your house” (Luke 19:5).

Again we must leave our own culture for a bit to enter into that of Zacchaeus.  Jesus addressed him by name, a sign of tenderness and love.  And He asked for hospitality, a sign of acceptance.  Given that Zacchaeus was easily the worst and most hated man in town, the one voted “Most Likely to be Struck Down by God,” such love was staggeringly unexpected.  With his customary understatement Luke records that when the crowd saw it, “they all grumbled, ‘He has gone in to be the guest of a man who is a sinner’” (Luke 19:7).  Such is the love of God:  it outrages decency and justice, and calls all to repentance—even grasping, oppressing scum like Zacchaeus.

The sprinting and tree-climbing of Zacchaeus challenges us as we head into Great Lent.  Zacchaeus wanted to see Jesus so badly that he left all his pride and dignity in a spattered heap at the bottom of the tree.  What are we willing to leave behind?  Our pride and refusal to forgive those who have hurt us?  Our laziness and failure to say our daily prayers?  Our greed and love of possessions?  We don’t have to leave any of these things behind if we don’t want to.  We can go through Lent more or less unchanged, and keep all of our habits intact.  We can remain as we are, content and leisurely, and stroll through life in dignified serenity.  But then we won’t see Jesus, and He will pass through our town without stopping.  Better to run and climb, better to divest ourselves of our pride and whatever else stands between us and a saving encounter with the Lord.

With the desire to “see Jesus,” even the “little man” can grow in stature – “to the measure of the stature of the fullness of Christ” (Ephesians 4:13) – and become almost unrecognizable in the process.  This demands overcoming obstacles that are exterior and social, interior and personal.  This comes at a price.  The familiar and comfortable must be left behind for the unfamiliar and uncomfortable.  Like it or not, Great Lent will pose such choices to us on the conscious and unconscious levels of our existence. The little tax-collector of Jericho badly wanted to see Jesus.  How badly do we want to see Him? Are we willing to follow and emulate Zacchaeus in this regard?

The Sycamore tree created a clear line of vision for Zacchaeus. It helped him to rise above the crowd and see the Lord clearly. It placed him in the right position for the invitation that would follow. Jesus told him to come down for he was coming to his house! Imagine the thrill.

For us, the Sycamore tree is a symbol of that place in our own lives which enables us to have a clear vision of Jesus. Zacchaeus did not hesitate. With the same lack of caution which he had demonstrated in climbing the tree, he came down to stand in the presence of God Incarnate. There he heard the call that would forever change his life. So may it be with all of us: When God calls we have only one choice, to respond without reserve.

Zacchaeus looked foolish that day. Especially to a crowd that was so quick to judge him. It did not matter to him. In fact, looking foolish to the crowd is “part of the program”. Are we willing to do so? St. Paul reminded the Corinthian Christians in his first letter: “God has chosen the foolish things of this world to confound the wise.” 1 Corinthians 1:20-27

The Corinthians lived in a City that prided itself on its great accomplishments. It was also drunk on its own debauchery. The early followers of Jesus did not and could not “fit in.” They had to be willing to look foolish. In our own day, we share a similar plight. In the midst of a culture that has seemed to have forgotten God, we are called to live differently.

Where is Jesus passing through in our own lives? He always shows up for those who have their spiritual eyes opened to see Him. How about in our workplace? How about in our relationships? How about in our families? Are we running out to meet Him? Or are we afraid? Are we wondering “if we see Him, what will He ask of us?”

How extraordinary is this wonderful love of God and how hard it is to comprehend its invitation. The God of the entire universe came among us as a man to show us both the love of the Father and how we are now invited and empowered, through His life, death and resurrection, to live in this world and prepare for the next. Zacchaeus teaches us about life in a Sycamore Tree. Let us learn to live our lives always looking for Jesus.  Let us discover our Sycamore Trees.

Adapted with appreciation from:  Orthodox Church in America at https://oca.org/reflections/fr.-lawrence-farley/zacchaeus-up-a-tree
Excerpts reprinted with permission of Catholic Online http://www.catholic.org/featured/headline.php?ID=1706