The Fifth Sunday of the Great Fast

This Sunday of Lent is dedicated to St. Mary of Egypt: From Harlot to Saint by the grace of God!   In her we see the power of sin forgiven. Hers is the story of passion converted and genuine love restored.

From the hardened sinner that she had been, Mary has, for a great many souls crushed under the burden of sin, become a source of hope and a model of conversion. This is why the Holy Fathers have placed the celebration of her memory at the end of the Great Fast as an encouragement for all who have neglected their salvation, proclaiming that repentance can bring them back to God even at the eleventh hour.

Mary was a woman who fell from the grace of God and lived the life of a fallen woman. For 17 years she sought pleasure in life, until out of curiosity she joined a throng of pilgrims, making a fated journey to Jerusalem for the Feast of the Exaltation of the Precious and Life giving Cross.

Shamelessly and without repentance in her life, she tried to cross the threshold of the Church of the Holy Sepulcher with the faithful Christians on their pilgrimage.  However, an invisible force prevented Mary from entering. Trying as she might, she could not enter, although those around her went in with no difficulty at all. Then she understood: it was the sinfulness of her life that held her captive outside the church.

Praying fervently to the Virgin Mary, with her heart open and clear, Mary begged forgiveness and again sought entry at the church.  This time she entered without hindrance, went into the holy of holies and was found worthy to worship the mystery of the precious and life-giving Wood of the Cross. Thus, she understood the promises of God and realized how God receives those who repent.

At the doors of the church, Mary had hesitated – the first time in her life she had ever hesitated before doing exactly what she desired. At that moment, her honesty enabled her to see beyond herself. And there, beyond herself, she found God. Her conversion was immediate; but so, too, was the grace that answers genuine repentance. For in that single moment on the steps of the church, Mary was both changed in herself, and found worthy in the eyes of the Lord. Her response was entirely in character: with perfect freedom and perfect love, Mary turned the whole of herself to God – her heart, her body, her very life.

Guided then by a vision of the Theotokos, Mary left at once for the desert beyond the Jordan River, for there, her vision told her, she would find rest. On the way, she stopped at a church built on the river banks; there she washed herself in the Jordan, receiving thus her baptism, and partook of the Eucharist in that church, all the while utterly alone. From there, she went to the desert, led still by the vision of the Blessed Virgin Mary. With the huge courage that had once enabled her to lead her life of sin with clear self-understanding, she now lived her life in the presence of God. The desert became her home, the place where she found her rest. Her new life had begun.

Towards the end of her earthly life, St. Zosimas of Palestine had gone into the desert across the Jordan for the period of the Great Fast and came upon Mary in the desert. The Saint recounted to him with tears the story of her life and conversion. Then, having finished her account, she begged him to come the following year to the bank of the Jordan with Holy Communion.

When the day arrived, Zosimas saw Mary appearing on the further bank of the river. She made the sign of the Cross and crossed the Jordan, walking on the water. Having received Holy Communion weeping, she said: “Lord, now lettest Thou Thy servant depart in peace according to Thy word; for mine eyes have seen Thy salvation” (Luke 2:29). She then took leave of Zosimas, asking him to meet her the following year in the place where they had first met.

When the year was past, Zosimas, going to the agreed spot, found the Saint’s body stretched on the sand. After burying her, he returned to the monastery telling the brothers about everything; all marveled on hearing of God’s miracles. And with fear and love they kept the memory of the Saint. 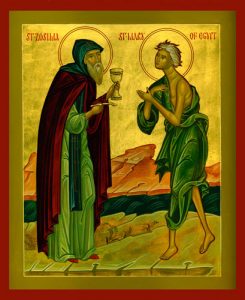 On this final Sunday before we enter Holy Week, the Gospel passage shows an interaction Jesus had with His disciples shortly before his entrance into Jerusalem on Palm Sunday. He gives clear instructions on how His disciples are to minister to the flock not as rulers but as servants. This is important to keep in mind in today’s society where ambition and status are valued more than helping our neighbor. To be first in the kingdom of heaven, which is better than being first in anything in this life, we must be last and a servant to all.

During the course of their discussions Jesus says,” For the Son of Man came not to be served, but to serve, and to give his life as a ransom for many.”   The entire Gospel centers on this revelation: “Whoever wishes to become great among you must be your servant, and whoever wishes to be first among you must be slave of all.”  Christ has been preaching and teaching and living this all along.   In Jesus’ upcoming days, He will show His apostles what this means. Jesus’ disciples must drink of His cup if they expect to reign with Him in his kingdom, and the cup He has in mind is a bitter one involving crucifixion.

What kind of cup does the Lord have in mind for us? For some, such a cup entails physical suffering and the painful struggle of martyrdom. But for many, it entails the long routine of the Christian life, with all its daily sacrifices, disappointments, set-backs, struggles, and temptations. A disciple must be ready to lay down his or her life in martyrdom and be ready to lay it down each and every day in the little and big sacrifices required.  Jesus’ teaching can be summed up with the expression: to serve is to reign with Christ. We share in God’s reign by laying down our lives in humble service as Jesus did for our sake. Are you willing to lay down your life and to serve others as Jesus did?

“Lord Jesus, your death brought life and freedom. Make me a servant of your love that I may seek to serve rather than be served.”

Adapted with appreciation from:
Sunday of St. Mary of Egypt – Greek Orthodox Archdiocese of America (goarch.org)