Second Sunday of the Great Fast 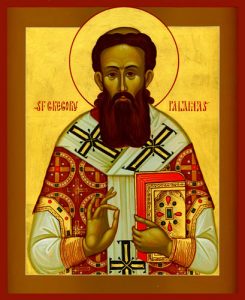 The first Sunday of Lent is called the Triumph of Orthodoxy, because it remembers the restoration of icons to the churches and the confirmation of the truth of Orthodox belief. The Second Sunday of Lent is dedicated to one of the pillars of Orthodoxy, St Gregory Palamas the Wonderworker, Archbishop of Thessalonica.  St. Gregory established a triumph of his own, denouncing the claim that God cannot be met through contemplative prayer.  Reaffirming that the still, small voice of God is heard when we make our minds get out of our own way and let our hearts pray like they are already burning to do.

St. Gregory was one of the main supporters of a theory of contemplation called Hesychasm.  Hesychasm means “prayerful stillness before God.” It is prayer of the heart; it is a gathering of thoughts and feelings in the presence of God by means of spiritual reading and prayer. It is a quiet time with God. By following the ways of Hesychasm, we discover Christ hidden in our hearts. He is waiting for us to discover Him in stillness through quiet contemplation.

On a trip visiting monasteries in the year 1330, Barlaam, a learned monk from Calabria, was scandalized by the practice of the prayer of the heart (the Jesus prayer). Upon seeing this, he shared his belief that unceasing prayer is intellectual and that it is nothing more than the conscious realization that nothing can be done without God. In contrast to Palamas’ teaching that the “glory of God” revealed in various episodes of Jewish and Christian Scripture ( such as the burning bush seen by Moses) was the uncreated Energies of God, Barlaam held that they were created effects, because no part of God, whatsoever, could be viewed by humans. In other words, Barlaam believed that seeing God and union with God were impossible in this life while the monks were stating the opposite.

In response to Barlaam, St Gregory, who was very well educated and who had a rigorous asceticism, explained that not only is it possible to see God in this life, but man can cultivate an active communion with God through unceasing prayer. To support his argument, St Gregory used the distinction between God’s essence and energy—His essence is what makes Him God and His energy is what He reveals to us. St Gregory used the example of the light the apostles saw on Mount Tabor at the Transfiguration as an example of God’s uncreated energy revealed in form of light. Though it remains impossible to know God in His essence, with sufficient prayer and fasting and turning oneself over to God, through purification of one’s soul, anyone can come to know Him and see His uncreated Light (Matt. 5:8).

St. Gregory defended the doctrine of the church that divine grace is uncreated. He also explained that we experience only this divine energy of God but not His essence, which is beyond understanding:

We cannot know God; we cannot define the infinite. God is incomprehensible in His essence. The phrase “Essence of God”   refers to God’s personal characteristics or to the aspects of His personality that can be described to a degree, but they cannot be fully defined.

The Bible is the Word of God, and as such it reveals those facts about the Creator that He has seen fit to reveal about Himself.  God, who is love, allows us to know Him through His divine energies, those actions whereby He reveals Himself to us in creation, providence, and redemption. It is through the divine energies, therefore, that we achieve union with God.

St. Gregory showed that asceticism and prayer are the way for each person to make the grace given at Baptism blossom within himself. He also defended the authenticity of the methods which the Hesychasts used to fix the intellect in the heart; for since the Incarnation we have to seek the grace of the Holy Spirit in our bodies, which are sanctified by the Sacraments and grafted by the Eucharist into the Body of Christ.

In 1341, a Council accepted the position of St Gregory Palamas and condemned Barlaam’s teachings as heresy. Thanks to this victory, the Jesus prayer has remained a precious jewel of the Church used not only by monastics but also by all the people of the Church. May we all use this jewel to grow closer to God in hopes to be joined with Him one day.

St. Gregory Palamas gives us the key: This Sunday is a day to remember what we often forget.  The stillness.  The heart.  It’s all there.  It’s just up to us to remember where we left it, buried it, and forgot it.   St. Gregory earnestly taught that ordinary people could see the divine light of God, could breathe the breath of God once more, if they will truly give themselves to prayer, to fasting, to worship, to good works, to humility, to real change, to becoming the kind of people concerning whom others can truly say, “Here is one in whom God lives, in whom God breathes. Here is one in whom I see God’s glory.” Are you one of these? 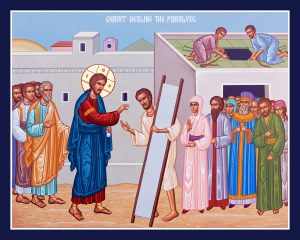 Today’s Gospel message carries several important lessons for our journey to salvation. The first is that we must come to Christ to be healed of our spiritual sicknesses. Christ did not just heal the paralytic but He also forgave his sins, which was more important.

Secondly, just as the paralytic’s friends helped him, we as the Body of Christ need to help one another. The passage stresses that it was not the faith of the paralytic alone that made him well. Only when Jesus saw “their faith” did He forgive his sins and heal him.

Thirdly, we can think of prayer, fasting, almsgiving, and obedience as the four friends that help us come before Christ and be healed. 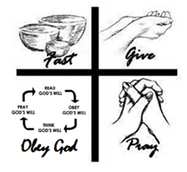