The Feast of Saints Peter and Paul 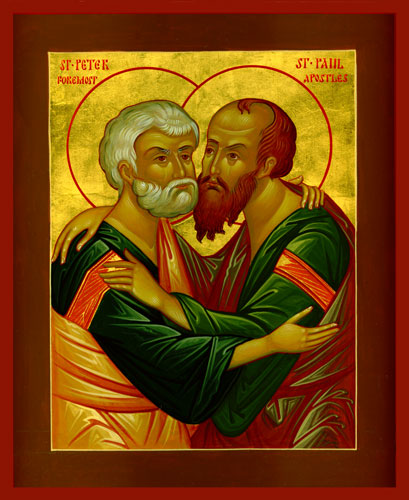 This Feast is an important day on our church calendar; in fact it has been re-instated as a feast day of obligation for the Ukrainian Catholic Church.  This Feast honours the two apostles who were responsible for laying the foundation for the Church of Christ.

Their significance to us was understood by Metropolitan Andrew Sheptytsky, who wrote, “All that we have, we owe to their apostolic labors and prayers … St. Paul, the Apostle, claims first place, for in his letters he has given to the Church a rich revelation of God, and a wealth of divine teachings … The Liturgical Year gives the Apostle Peter first place, assigning him two days in the year, namely January 16th, the Feast of St. Peter in Chains and June 29th.”

Peter and Paul were martyred in Rome under the Emperor Nero in the year 67.  Peter was crucified head down at his own request.  Paul was a Roman citizen and, therefore, could not be crucified according to Roman law.  He was beheaded.  The Church unites them in a common celebration on June 29th and gives them identical honour.  Since our parish is named for these saints, we celebrate this feast day in a special way to honour our patrons.  This is our parish Praznyk!

Peter was a simple fisherman who realized the holiness of Jesus the fist time he saw Christ.  There is no doubt that Simon enjoyed a special relationship as a leader of the Apostles.  Christ called him the “Rock” (Peter) and said that upon this Rock He would build His Church.  Peter moved around in his apostolic work, consecrating bishops of villages and cities wherever he went.  An important role of Peter and the Patriarchates founded by him was to speak on matters affecting the entire Church, including teachings and doctrine, both East and West, North and South.

Saint Paul, on the other hand, had a different calling and role within the Church.  His various letters to the Churches makes him the patron of the Local Church.  Paul was raised in the strictest possible tradition of Pharisaic Judaism and was a Pharisee himself.  He severely persecuted Christians until Christ met him in a powerful and intimate way.  He went from being the most unlikely person to adapt Christianity to non-Jews, to being the Apostle of the Gentiles!  For St. Paul, the Church existed at different levels.  The most basic level was the “Home Church” run by parents and grandparents.  This was where Christianity was taught and experienced.  In times of persecution, the Home Church was often the only place where Christianity could be lived and passed on.  The next level, the Local Church, is where the Gospel was proclaimed in a way the local community could understand and celebrate it according to its own culture and experience.

Ss. Peter and Paul are honoured together since they bring together both understandings of the Church.  The one brings light to the message of the Gospel and the other makes the light shine more brightly for us by adapting the message to out world-view.

For our part, all parishioners should sense the eagerness and joy that the opportunity to celebrate our Praznyk brings.  It instills the Spirit of love and joy that a parish family must represent; it encourages us all to a greater generosity of our time and talent to the life of the church.  Into our own lives may the celebration bring the fullness of belonging that we need to feel in order to live our Christian lives to the fullest, readily, wholeheartedly, and gladly — knowing what the holy Apostles knew, that God is with us!