The Nativity of Saint John the Baptist

St Luke’s gospel opens with an account of two miraculous conceptions and births.  Jesus and John were both conceived by impossible mothers – a virgin, and a barren old woman, and both are announced by angels and surrounded by heavenly signs. The angel Gabriel in the story of the Annunciation fixes precisely for us the birthday of the Baptist: Elizabeth, Mary’s cousin, he tells her, is pregnant in her old age, and “this is the sixth month with her who was called barren”. So John is just six months older than Jesus.

The parents of St. John the Baptist were Zachariah and Elizabeth, cousin of the Blessed Virgin Mary. One day, Zachariah, a holy priest, was taking his turn in the temple, offering the daily sacrifice of incense. The angel Gabriel appeared to him, announcing that, even though Elizabeth was past the child bearing stage and barren, their prayers would be answered. Elizabeth would conceive and bear a son whose name would be called John. Zachariah marveled at these words but asked for a sign. The angel answered that Zachariah would be stricken with dumbness from that moment until John was born.

We are all familiar with the Visitation of the Blessed Virgin Mary to her cousin Elizabeth’s house.  Before he was born into the world, John had already begun to live for the Incarnate God; even in the womb he recognized the presence of Jesus and of Mary, and leaped with joy at the glad coming of the Son of man.

It’s not a coincidence that John’s father and mother were ancient, or that John’s father was a priest of the old order, the servant of that Temple which was soon to pass away.  John himself came at the end of the age; he’s the last of the prophets of the Old Testament.   John was the last voice of warning and vigilant longing, before the desire of the ages, the Messiah, appears, and the world’s long time of expectation comes to an end.

John is the last voice of the Old Covenant, the close of the Age of Law. Jesus is the first voice of the New Covenant, the beginning of the Age of Grace. Accordingly, John is born to an elderly, barren woman, born when it is really too late for her to be having a child, while Jesus is born to a young virgin, born when it is really too early for her to be having a child. Jesus appears in the dead of winter, John in high summer.  From John’s birth, the days dwindle towards darkness; from Jesus’ birth, the days stretch towards the light.

From the day of the Nativity of John the Forerunner, the preparation of the human race begins for meeting the Son of God on earth.  And Zachariah, John’s father, says to his newborn son, “And thou child shalt be called the prophet of the Highest: for thou shalt go ahead of the Lord to prepare his ways, To give knowledge of salvation unto his people, for the remission of their sins, Through the tender mercy of our God: whereby the day spring from on high hath visited us, To give light to them that sit in darkness, and the shadow of death”.  So John, then, is a figure of the darkness before the dawn: he stands at the cusp of the morning.

Long before Christ’s public life began, to escape from the world and its allurements, John withdrew to the desert, and there occupied himself only with God and with what concerned his vocation.  His food was locusts and wild honey; his clothing a garment of camel’s hair, fastened by a leather girdle; his bed the hard ground.   He remained hidden, because He for whom he waited was also hidden.   Thus he lived in the wilderness till at age thirty, by the command of God, he was to proclaim the coming of the Messiah. 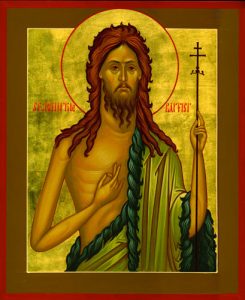 As crowds broke in upon his solitude, John became “a voice crying in the wilderness, make straight the way of the Lord”.  He began to announce the coming of the Kingdom, and to call everyone to a fundamental reformation of life.  His Baptism, he said, was for repentance. But One would come who would baptize with the Holy Spirit and fire, and John was not worthy even to carry his sandals.  As the forerunner, he prepared God’s people to receive Jesus, the Messiah.

John was humbled to find one day in the crowd One whom he did not know, until a voice within told him that it was his Lord. He affirmed: “I did not know Him, but He who sent me to baptize with water said to me, ‘He upon whom thou wilt see the Spirit descending and abiding, He it is who baptizes with the Holy Spirit.’ ” Jesus asked John to baptize Him.  After he did so, the heavens opened up and a voice was heard to say, “This is my beloved Son, in whom I am well pleased.” (Matthew 3:15-17).

With the baptism of Jesus by Saint John, Christ began His voluntary abasement for the sins of His people; and Saint John saw the Holy Ghost descend, under the visible form of a dove, indicating in the humble Jesus of Nazareth the divine Perfection of the peaceable Eternal King. “I told you,” he said, “that I am not the Christ. The friend of the Bridegroom rejoices hearing the Bridegroom’s voice. This, my joy, is fulfilled.”  The greatest work of the Saint’s life was done.

Except for the Mother of God, no one had a higher function in the unfolding of salvation, and except for the Theotokos, there is no greater saint.  John’s fierce courage in denouncing evil—all stem from his fundamental and total placing of his life within the will of God.  John challenges us Christians to the very basic attitude of Christianity – total dependence on the Father, in Christ. For John, living in the desert wilderness brought a special closeness to God, a purity of faith to the one true God.  There are times in our own lives when we feel abandoned and isolated, in a desert of sorts with our troubles and fears.  This is when, in our solitude, we should listen for the voice of the true God.  Be assured He is there!