Feast of St. Nicholas the Wonderworker 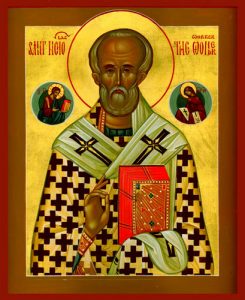 St. Nicholas is a beloved saint of the Eastern churches.  Most of what we know about him is probably more legend than history. Nicholas was born into a rich merchant family on the west coast of Asia Minor in 280.   A story is told of how he became Archbishop of the city of Myra.  While the bishops were gathered to choose a new archbishop, they miraculously received a message telling them to choose the first man named Nicholas to enter the church the next morning.  Inspired by the Holy Spirit, Nicholas went to Myra and was the first Nicholas to enter through those doors!

As Archbishop of Myra, Nicholas was noted for his deeply religious life, his generosity and love of the poor, his battles against heresies, against persecutors of Christians and human injustice.  He was a true shepherd of his people and a model of faith.  He was an example of virtue, attaining greatness through humility and wealth through poverty.

Nicholas was present at the First Ecumenical Council in Nicaea in 325 at which our Nicene Creed was developed.  He was eventually imprisoned for his beliefs and for opposing the horrendous treatment of Christians at the hands of two emperors. He died on December 6 in the early 4th century.

Thousands of churches have been built in Nicholas’ honour and his name remains popular.  Every Thursday is dedicated to his memory in the Ukrainian Catholic Church.  He is a popular figure in Byzantine iconography.  He is often seen in the center of an icon attired in Episcopal robes surrounded by miniature scenes from his life.  One of these scenes depicts him in full length with a sword in his right hand, and a church in his left.  The sword represents his spiritual ornament according to the words of St. Paul:  “you must wear the armour which God provides, so that you may be able to stand firm against the devices of the devil…Take up God’s armour, then you will be able to stand your ground when things are at their worst…” (Ephesians 6:11-17).  The church on the other hand, symbolizes his great love and zeal for the purity of faith and his defence against heresies and the enemies of his flock.

By popular culture, St. Nicholas is perhaps the most closely linked saint to the Christmas season. His life of gift giving and defense of the faith connect with the spirit of Christmas within us. The proximity of St. Nicholas’ feast day to the feast of the Nativity is an accident of history.  Saint days are on the church calendar for the day the saint fell asleep in the Lord; on December 6, we remember St. Nicholas.  Saint Nicholas gave of his wealth to help others throughout his lifetime. Because of his generous actions, St. Nicholas is a strong reminder of the call of Christ.

The feast day of St. Nicholas is celebrated during the time of Pylypiwka when we are preparing our hearts to celebrate the birth of our Lord.  St. Nicholas shows us the ideal of love, charity, and generosity.  He was ready to help anyone in any situation, regardless of the cost to himself.

In the Ukrainian tradition, St. Nicholas, not Santa Claus was celebrated.  Gifts were given only on December 6, not at Christmas, and they are given only to the children.  Regardless of when we exchange gifts, and with whom, let us celebrate St. Nicholas’ memory by imitating his goodness, generosity and selfless giving.

Adapted with appreciation from: The Winter Pascha bulletin series by Steve Puluka: http://puluka.com/documents/WinterPascha2.pdf